Hi! Thank you so much for reading Krystoff’s route. I’m sorry for such an awkward and unconventional story format, but I hope you were able to enjoy it anyway. I’m going to word vomit about it now!

You’re not supposed to play favorites with your children, but Krystoff’s story is the one I absolutely wanted to tell the most out of The Duenkhy cast. Not even really because I had that clear of a vision for the plot or anything, but Krystoff was just such an immediate joy for me to write and characterize, and out of the love interests, he’s the only one that Jun starts out not really liking, so I was excited to see their romance blossom. Banter is one of my absolute favorite things to write. Jun is generally very calm and easygoing with the other characters, so it’s fun to see the meaner side of them that Krystoff coaxes out.

If you weren’t around for the beginning of the conception of Duenkhy, let me explain this again. Originally I made a pretty extensive Ren’py demo for it in a proper visual novel format. And actually, I wrote what I’ll refer to as “the original drafts” of everyone’s routes. Yeah, there’s an entire completely written game that never saw the light of day because I just never got around to dumping in visuals and coding the routes. Cassius original draft was the only one that ever made it into the playable demo.

Those drafts are trash by the way. Even though I worked really hard and collectively wrote hundreds of thousands of words, I may never let anyone see that version of the game.

HOW THINGS TURNED OUT

Krystoff original draft was almost entirely different from what I ended up rewriting to post here. Originally, saving money to permanently move into the duenkhy neighborhood was a factor for Jun, so Krystoff properly hired them as an assistant. I completely threw this out because it caused a strange relationship imbalance where it felt like Krystoff only knew how to keep Jun around by throwing money at them, LMAO. I mean, that’s not super out of character but that’s not how I wanted things to play out. Most of all I wanted to encapsulate that sort of Beauty and the Beast “being trapped in a beautiful and affluent man’s depression mansion” scenario. Well, Jun isn’t trapped, but they sure don’t have anything else better to do. Kidding.

Most of the family drama for Krystoff in the original draft revolves around Rotys’lav, and I don’t think their parents ever directly made an appearance. This time around I really wanted to show the parents, but they still ended up being a little inconsequential, lol. I was just really enamored with the idea of subverting the “dead human mom” trope by having Angkit actually be not only secretly alive, but also training to magically overpower her extremely evil husband. It ended up just being a silly parent kaiju fight but that’s fine.

I’m happy with how uniquely estranged from every member of his family Krystoff is. Despite Royts’lav easily being the most malicious and self-serving, Krystoff actually had the most familial love for him because he was actually some small part of his upbringing. Things will be hard for him in a new way now that his family is essentially completely gone, but at least Jun is there for him. Makes you wonder what happens to him when you do the other routes, huh?

Jun’s history is a little mysterious on purpose, by the way. It was my idea that you learn different things about them in every route and kind of piece together the full puzzle. I honestly don’t know if I’ll ever be able to finish writing new versions of the other routes, at least not right now, but I’m happy with with snappish, self-motivated Jun that develops in Krystoff’s route. Did you notice their hair growing as the story goes on? 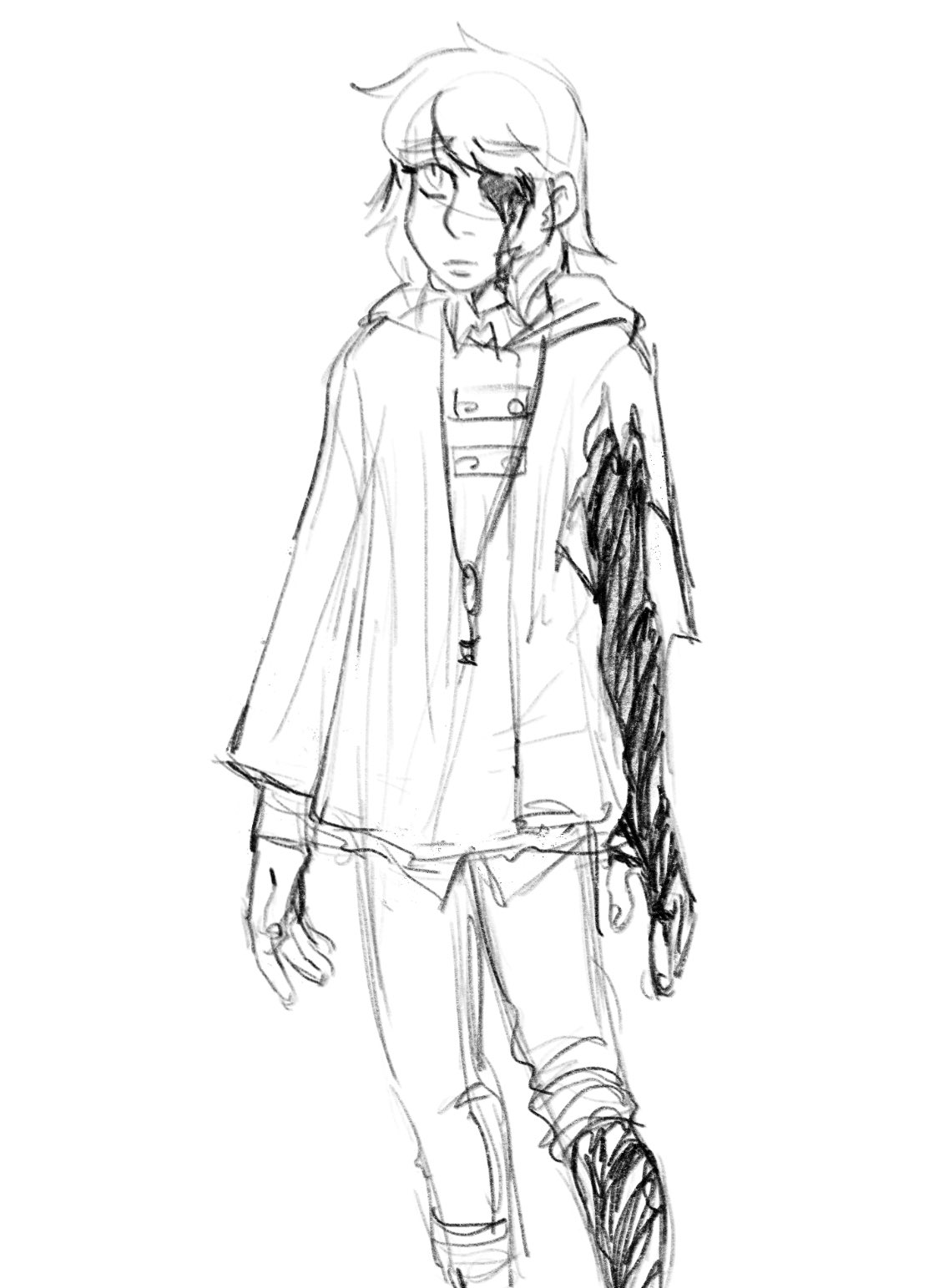 Yes, Jun’s eye loss is permanent after the events of this route. They really come out of Krystoff route worse for wear. Also, if you noticed that they stopped wearing their skull mask almost entirely partway through the story, it’s because there’s a curse on the mask that prevents leaving the sector. Once a need to exit and re-enter Krystoff’s sector became a factor, the mask was an inconvenience to them. Its main function was also to protect them, but as they grew comfortable around Krystoff, they started to trust that he’d be able to protect them better than the mask would anyway. I promise this wasn’t just because I wanted to draw Jun’s face more.

What’s the thesis of this route? Really, not much of anything. Krystoff and Jun realize they have a lot in common in terms of personal baggage and the maladaptive ways in which they bottle that baggage. It was relaxing to write a story that doesn’t need to mean anything. I just wanted you to imprint on Krystoff. I hope it worked.

I didn’t get to show nearly enough of the rest of the cast in this route, sadly, especially Rafael because he and Krystoff have a VERY hard time communicating with each other, lol. So here’s some of my thoughts on Krystoff’s relationships to the rest of the cast. Maybe I’ll write side materials of ensemble cast eventually.

^ And yet I designed a fanchild anyway. She isn’t real but she’s cute.

OTHER ODDS AND ENDS

I like to try to match my characters to seiyuu because I’m a loser and it’s fun to be able to imagine a proper voice for them. Plus most seiyuu sing and it’s the ultimate dopamine to pretend it’s my character singing. Here’s Krystoff in my mind, and here’s Jun. Bonus boarded Krystoff set to Shoutan speaking. Wheeeeeeeee

Here’s a goofy character playlist I made while writing the route. Half the songs are just “I happened to be thinking about Krystoff while listening to this” but oh well.

And here’s a whole bunch of art.

I just kept redrawing the same picture to put different outfits on it, to help me remember what Krystoff (and Jun) were wearing in a given scene.

A concept for a form Krystoff might have taken to look more like his brother, before he realized he hates his brother.

This has no basis in canon. None.

Doodles for a humanoid form for Regenald. Does it have any basis in canon? Who knows.

Krystoff with Ankora, who isn’t a part of this particular story/timeline, but they’d probably meet at some point. Ankora is a character from another body of work I’m currently ruminating on.

And now for “comics” and stuff…