And so, I find myself at our neighbor’s door, hesitant to knock. Briefly, the thought that Lady could easily be setting me up with something dangerous occurs to me, but I dismiss it. After all, if self-preservation were a high priority for me, I wouldn’t have come to Duen in the first place. I knock and wait.

Someone within cracks the door open very slightly. It’s so dark inside, all I can see is the hand curled around the door and the faint silhouette of a person.

Oh, geez. Upon closer observation, the hand is missing a finger, and the skin is a sickly blue. My mind starts racing with all the entities this person could be.

?: Welcome, I guess. I’m Shawn. Not that it matters terribly…

Another hand emerges from the darkness. This one boasts five entire fingers, and I shake it only with some hesitation. He’s cold and velvety to the touch. I try not to be too put off by that.

Then, the man connected to the hand moves slowly into the light, and he is not at all what I expected. Half of his face is torn away, revealing discolored gums and teeth, though it doesn’t stop him from offering a weak smile. His otherwise stately stature is diminished by poor posture and the constitution of a whittled branch. The bones in his arms are so prominent, I almost fear I might snap his wrist just by shaking his hand.

Not to mention his clothes look like they’ve gone through a blender. I try to turn a blind eye to some questionable stains. Goodness knows I don’t usually look much better when I’ve been holed away without company for long periods of time. Even still, it’s hard to ignore the strange, stagnant smell he carries. I keep my distance and do my best to hide the fact that I’m kind of holding my breath. If I had to guess, he’s some kind of… undead being…

When he retracts his hand from mine, he glances down at it warily, like he’s never touched another person’s hand before. It’s a very real possibility that this is the case.

But more importantly, he doesn’t seem familiar with Lady, and he isn’t the “Tor” I’m looking for. I start to suspect I went to the wrong neighbor’s house, but I’ve already committed to my foolishness, so I try to run with it as inconspicuously as possible.

JUN: So, uh, have you lived here long? Do you like it here? 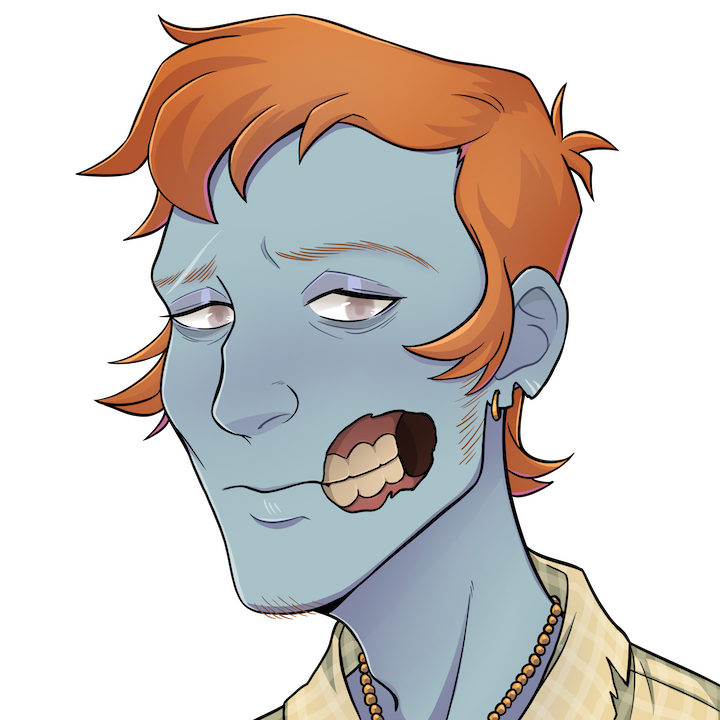 SHAWN: …Sorry, one question at a time, if you don’t mind. I kinda have, like, a headache… so it’s hard to think…

SHAWN: Uh… Yeah, I guess I like it here. It’s usually pretty quiet. I don’t leave the house if I can help it, though.

SHAWN: …Sorry, what was the question again?

SHAWN: By the way, this is probably a strange question, but… do you own a 3BS?

3BS is a handheld gaming system, and for some reason, I did in fact bring one with me into this land of magic and talking keyboards and fish men and living, breathing frankensteins (or frankenstein’s monsters, whatever). Pedestrian as it may seem, it’s something of a comfort object for me. I used to bury my face in it whenever I wanted to appear preoccupied and unavailable to the world.

SHAWN: I noticed that I’ve started getting… roadpasses, and I never got those before… But if you’re living right next door, that would explain it.

JUN: Come to think of it, I haven’t checked my roadpasses in a while. That’s cool! We should, uh, exchange friend numbers.

The 3BS has a feature called roadpassing where, if it comes within close range of another 3BS system, it swaps the players’ character data. Sort of like a system-to-system greeting. I pull out my little green 3BS from my back pocket and open it up.

Sure enough, Shawn’s character is waiting for me with a pleasant little smile. The greeting reads, “Take care!”, which is surprisingly cute for such a dour looking guy. His character bears only a superficial resemblance to him. The hair is about right, but everything else is… well, normal. Most likely due to the character creator limitations.

The thought occurs to me that it’s surprising for a human invention like the 3BS to be in the duenhky world to begin with, but I guess it wouldn’t be that hard for human items to cross over and get left behind.

JUN: Aaand I friended ya. Friend me back whenever.

Shawn smiles down at the 3BS in my hands as if it were an old friend. Maybe I’m not the only one to get a weird sense of comfort from the little device.

Even though we’ve only swapped what feels like three measly words, I wave him off cordially and return to my directive of finding the actual Tor. Shawn doesn’t seem much for casual conversation, and honestly, neither am I, so I’m happy to free both of us from the social obligation if he’s giving me an out. The steps of his front porch creak loudly as I trot along on my merry way, and when I glance over my shoulder to see his crooked form disappearing back into the inky shadows, I could almost convince myself that the entire exchange was a dream.

Like he was just a haunted house prop all along.

>Try the other house